Take a ride on the world’s scariest attraction. But be warned, there’s no telling when the terror will end. 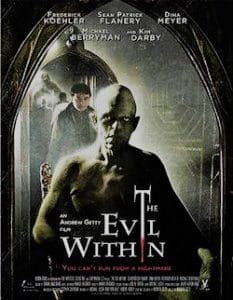 More than two years after its release, and almost two decades since the original launch of its production, I experienced the living nightmare of Andrew Getty’s horror film, The Evil Within. A mere five minutes of Getty’s horrific storytelling was all it took for me to realize The Evil Within would hold the title as being the most terrifying movie I have ever seen.

And trust me, I love a good horror flick, but this film didn’t rely on jump scares or over-excessive body horror to prove its menacing point. Despite its somewhat over-dramatic storyline and added Hollywood pizzazz, this story isn’t all fiction. The Evil Within tells a grim tale of mental illness and the battle against one’s inner demons that isn’t all fantasy.  Many of the struggles faced by characters in the film are legitimate and highly relatable. The empathy felt for the main character makes the story extremely terrifying and the viewer quickly realizes these horrors could happen to anyone.

The film is experienced through the fickle eyes of Dennis (Frederick Koehler), a young man with a mental disability who suffers from debilitating nightmares. A demon (Michael Berryman), also known as the Cadaver, has made his way into the broken and vulnerable mind of Dennis. The Cadaver, who may just be a figment of Dennis’ imagination, relentlessly taunts Dennis though his own reflection in an antique full-length mirror given to him by his brother (Sean Patrick Flanery). Dennis’ sane mind is slowly clouded by dark thoughts and chronic nightmares. The Cadaver eventually convinces Dennis that committing murder is the only way to free himself from his haunting hallucinations, and the tale becomes exponentially bleak from there.

The idea behind the film comes from childhood nightmares Getty experienced as a kid. The original title given by Getty, The Storyteller, reflects the psychological trauma brought on by his crippling story-like childhood hallucinations. The idea that the little voice in one’s head can grow into an uncontrollable and overwhelming force is a frightening thought. The psychological elements of the film remind viewers that severe mental instability can lead to violent acts if left untreated.

Getty’s bizarre fascination with nightmarish animatronics is proudly displayed throughout the film. Dozens of ghoulish robotics, including a large animatronic drum-playing octopus, were all original Getty creations. His eye for innovative practical effects is a treat rarely seen in modern film. The eloquent and illuminating descriptions from Dennis’ inner thoughts combined with low budget horror elements makes the entire film feel like a living, breathing nightmare.

It wasn’t just the sinister atmosphere of the film, or the utterly disturbing dream-like sequences that had me shaken as the credits rolled. Getty’s personal struggles, on and off the set, cast an ominous shadow on the entire film. The true story behind the production of the film was a real-life bad dream that would keep anyone up at night.

Director and producer Andrew Getty, heir to the Getty oil company, sunk an estimated 6 billion dollars into the production of his film. The Evil Within is the first and only film of Getty’s that would ever make it past the pages of script. Most of the movie is filmed in Getty’s Hollywood Hills home, the same home where he was found dead in 2015 from drug-related complications. Andrew’s death is one of many tragedies to hit the Getty family in the last several decades. Drug addition, familial strife, and psychological trauma are all major elements of the Getty dynasty. Andrew’s cousin John Paul Getty III’s story became famous after his hellish kidnapping in 1973. Several film and television adaptations were later made about his experiences which further reveal the familial dysfunction that has left a curse on the Getty name.

Getty’s death wasn’t the only tragedy surrounding the production and release of The Evil Within. Reports show that funding problems and major complications with cast and crew members drastically slowed production. Along with Getty, producer Robert Stark Hickey was found dead at his home in 2013 from an apparent accidental gunshot wound. Actor Matt McGrory passed away from natural causes in 2005 after shooting a short cameo for the film. The Evil Within is dedicated to Getty, Hickey, and McGrory.

Many have turned away from the film for it being too disturbing. The 2017 release seemed like a sick horror flick from the 80’s that barely made it’s DVD release. Constructed from decades of work, the obscure displacement of the film makes it astronomically singular in the horror film industry. Being the demonic lovechild of a man disturbed by a tragic family history and recreational methamphetamine use, The Evil Within played upon the evils that lay dormant in the minds of everyone.

Do you love horror films as much as I do? Check out my other blogs here and let me know what you think!