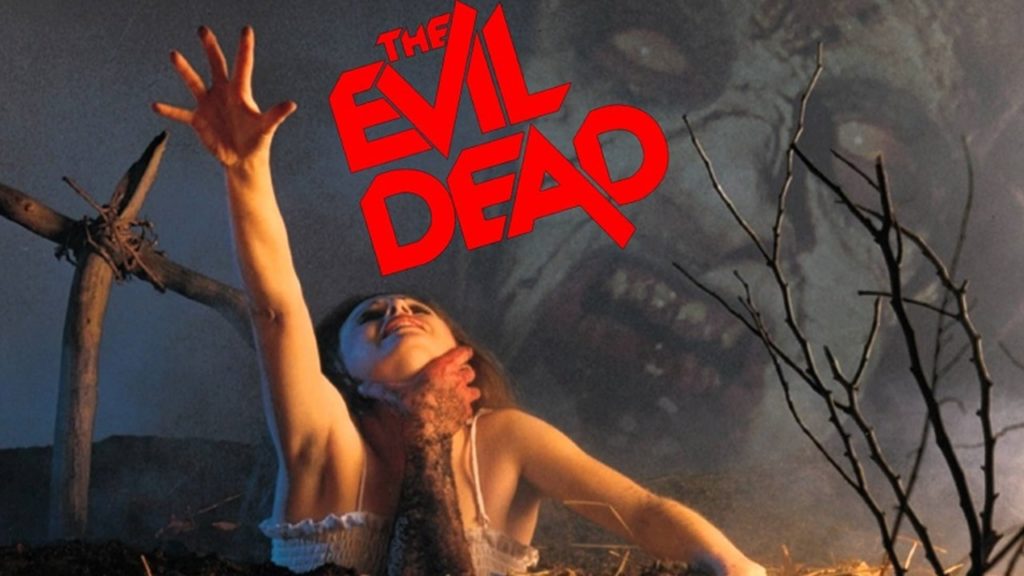 Dear reader, I have a confession to make that will sadly mean the end of my indie filmmaker street cred; up until very recently, I have never watched any of the Evil Dead movies. After years of being ridiculed by my close friends for this fact, I decided to rectify my lack of cultural enrichment by buying the latest Blu-Ray edition of the original 1981 cult classic, The Evil Dead. I watched it on Halloween with the lights turned off for maximum spook factor, and I can safely say that I came away pleasantly surprised by how much I liked it. If you want to hear more of my amateur film criticism, please read on.

To start off with a bit of background, The Evil Dead is a 1981 supernatural horror film written and directed by Sam Raimi. At the time, Raimi was a twenty-year-old nobody who, along with his childhood friend Bruce Campbell, managed to cobble together a $90,000 shooting budget and a crew consisting mostly of family and friends. It was a humble beginning for Raimi, and then it got a whole lot more humbling when shooting actually started.

The horror stories of The Evil Dead’s production are probably scarier than the movie itself. The cast and crew alike struggled through production snafus resulting from inexperience, numerous physical injuries, extreme exhaustion, and horrible living conditions which included sleeping in the same cabin they used as the movie’s setting (which had no plumbing). On the last day of shooting, conditions had become so dire that the crew started burning furniture for warmth. But that’s a story for another day.

Speaking of story, the actual plot of the movie is about as straight forward as it gets; a group of five college students venture out to a remote cabin on vacation. This group consists of the iconic Ashley “Ash” Williams (played by Bruce Campbell) and four redshirts who are so utterly forgettable that I had to look up their names on the film’s Wikipedia page. In the cabin, they find a tape recorder and a mysterious manuscript called “The Book of the Dead.” When played, the tape recorder emits a series of incantations which summons a horde of demons that begin to possess everyone in the group except for Ash. Ultra-violence ensues, with severed limbs and heads flying everywhere like graduation caps.

And that’s the plot. No really. That’s it.

Now, if you have even a passing interest in B-Horror movies, then the summary I just gave probably sounds eerily similar to a lot of slasher/supernatural horror schlock-fests that you’ve already watched. The Evil Dead serves as a kind of “origin of species” for the box-standard horror movie plot of, “college students go to an isolated location and get attacked by (insert threat here).” So, watching The Evil Dead today in this era can at times feel like watching Seinfeld after you’ve already seen all the shows that it inspired.

This is why I say that the weakest aspect of The Evil Dead is the first twenty minutes of its running time. The dialogue is bland, the characters are one note, and the performances are average at best. It all feels like something you’ve seen before. But once the demons show up and shit hits the fan, The Evil Dead really starts to shine. As the possessions take hold, Ash’s friends get twisted into monstrous forms brought to life by some really nice make-up and prosthetics.

The blood-and-gore effects are completely over the top, to the point of being comical. Even the performances get better as the carnage ensues; Bruce Campbell manages to portray Ash as someone who is genuinely on the verge of losing his mind, as his friends drop like flies around him. Ironically, the cast feels more alive only after most of them have been killed and brought back from the dead.

The easiest way to explain the appeal of The Evil Dead is this; while it is by no means a smart movie, it is a smartly made movie. The premise may have been repeated ad nauseum over the years by imitators, but it’s the execution that really counts. The cinematography has a manic energy to it with lots of handheld shaky cam that, instead of feeling like a gimmick, actually conveys a sense of madness and imminent danger. Most importantly though, the film has an expert sense of pacing. Despite the rather ludicrous gore and violence, The Evil Dead ironically knows when to use restraint. It knows when to ramp things up and when to let things calm down. It doesn’t have those long moments of padding that are so typical of B-Horror Movies, where the characters just wander around in the woods waiting to get bodied to advance the plot.

So in spite of its slow beginning and retroactive quaintness, I would definitely recommend The Evil Dead. It’s a cult classic for a reason and remains a shining example of what can be achieved on a low budget, as long as you have grit, determination, and a couple of friends willing to put up with your nonsense.

Did you enjoy this article? Do you have any ideas for future Throwback Thursday’s? Let us know in the comments!