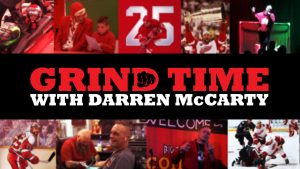 Darren McCarty has over 30 years of experience on the ice as professional hockey player and member of the NHL from 1992 to 2009.  Known for his fierce fighting spirit on the ice, McCarty earned the title as the enforcer of the Detroit Red Wings, a dominating role which won his team the Stanley Cup four times in 1997, 1998, 2002, and 2008.  Darren has taken all that has made him a champion and brought it to his podcast, “Grind Time with Darren McCarty”.

There is never a dull moment when Darren puts words to his honest thoughts about sports, family, sobriety, music, charity and whatever else is foremost on his mind.  With special guests such as prominent athletes and inspirational public figures, Darren focuses on the people and stories that inspire us to face life’s challenges head-on while endeavoring to enrich the lives of others.

Fans can interact directly with Darren by contacting grindtime@nrmstreamcast.com to provide feedback and ideas or for a chance to talk with Darren on the show.  More information about Darren McCarty and Grind Time can be found at darrenmccarty.com.