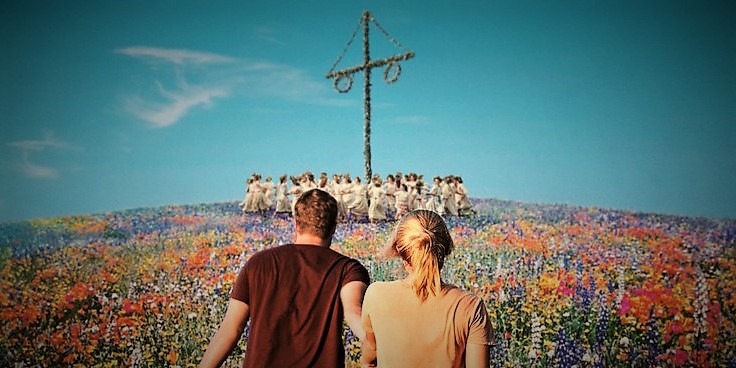 Ari Aster’s psychological horror flick takes everything we love about summer vacation and turns it into a nightmare of a trip. 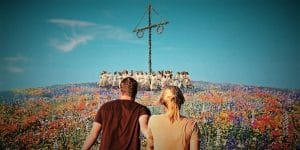 Midsommar is the summer vacation you shouldn’t take your girlfriend on.

Just when you think your family summer vacations are bad, Midsommar makes annoying siblings and endless car rides seem like a breeze. Ari Aster’s new psychological horror film has moviegoers suspicious of loved ones and second guessing their next trip to Europe.

The film follows a group of young vacation-goers as they visit their friend’s secluded hometown in the hills of Sweden. The trip falls on the commune’s long-awaited midsummer festival. The already troubled vacationers hope to find solace in the sweeping hills of Sweden but quickly realize it’s not the vacation they have planned for. The soothing scenery and cheery locals progressively become more horrifying as questionable rituals and festivities commence.

Fans of Aster have high hopes for Midsommar, but will be pleasantly surprised to find it is nothing like what’s expected. Midsommar is Aster’s second film to hit the big screen, behind last summer’s horrifically terrific horror film Hereditary. Much like Aster’s short films The Strange Thing About the Johnsons (2011) and Munchausen (2013), family strife and hidden demons are a common focal point. Sprinkled with elements of dark physical and psychological horror, Aster plays upon the most unlikely of dangers. While Midsommar has the recognizable Aster-elements, like corpse mutilation and grotesque characters, it tells a familiar story of cult culture with an extra jolt of terror.

The bright ambiance and jolly atmosphere of the Swedish town make the location seem like the perfect place for any traveling hippy.  Its flowery festivities and sunny skies are welcoming to the unsuspecting outsiders. The group’s hearty dose of psychedelic mushrooms early in the vacation adds an unsettling skew to the surrounding environment. Characters and viewers have a continual “bad trip” – feeling roused by every sip of the commune’s mystery drinks and hallucinatory powders.

The beautiful scenery and seductive young women of the cult are the deadliest aspects of the film. The physical bodies of the young cult members and their visitors disintegrate into mere ceremonial idols. The bodies of those who fall victim to the cult’s deadly rituals are decorated in death, displayed proudly in shrouds of wildflowers in commemoration of the festival.

The two-and-a-half-hour-long film is packed full of elements of foreshadowing and complex imagery.  The image of a bear early in the film makes its gruesome reappearance another two hours later. Along with paintings displayed in the sleeping hall of the commune, quick glimpses of horror and violent images add mystery to the already devilish plot.

The runic texts designed by the physically deformed oracle of the community is kept hidden from the vacationers. As anthropological graduate students, two of the visitors attempt to dig deeper into the cult’s practices as the topic of their theses. The discovery of  the runic texts is nothing more than blotches of smeared paint and scribbles, a mimic to the cult’s chaotic way of life. The more the two begin to uncover, the more sinister the surrounding environment becomes. An attempt to better understand things that can’t be explained only leads to more devastation, despair, and increasingly horrific discoveries.

Don’t Worry, Everything is Fine

Peer pressure is a major driving force behind the horrors experienced by the unsuspecting characters. Dani’s character, played by Florence Pugh, wedges herself into the guys-only vacation with the help of her sympathetic boyfriend. The pressure to take drugs and participate in the commune’s rituals continue with little question. Dani’s wishes to leave are answered with adamant reassurance from commune members that there’s no need to panic.

The cult’s unconventional celebration is explained as a long-standing custom in the community. The vacationers tread lightly, knowing their disapproval may be found as offensive. Much like the cult culture they are immersed in, characters do what they are told despite ever-growing uneasiness. Dani’s evolution into an esteemed member of the cult is aided by constant encouragement from its members. Unquestioned ceremonies flourish into a fiery grand finale, with a devilish smile to top it all off.

Despite having complimentary themes among his feature and short films, Aster’s unique storytelling skills make each of his works stand apart from the rest. The slow development of Midsommar gradually builds in suspense until viewers realize there’s little hope for a happy ending. The uncommon bending of classic story progression adds to the overall nightmare-like experience. Utilizing common social tropes in a uniquely sinister environment, Aster has created a new top dog in the realm of psychological horror.

Are you a fan of horror flicks? Check out my other horror-themed blogs here and let me know what you think!