After already winning over the hearts of young voters with the offer of free college tuition and the legalization of marijuana, Senator Bernie Sanders just added another alluring twist into his political campaign. In the midst of heightened fascinations surrounding UFOs and extraterrestrials, Sanders reveals his intentions on releasing classified government information on UFOs to the general public if elected president in 2020.

During an interview with Joe Rogan, Sanders admits that he has no access to information regarding UFOs, but if elected, his wife would demand answers. While this playful banter between a comedian-turned-podcaster and presidential candidate may be simply conversation, it touches on a subject that has seen a lot of attention in recent years.

Just last month, the U.S. Department of Defense reportedly briefed several senators on recent naval encounters with unidentified aircraft. Numerous reports have reached the Pentagon in recent months concerning “aircraft that appeared to defy the laws of physics and aerodynamics while in military airspace” and “strange objects flying above 30,000 feet at hypersonic speeds with no visible engine or infrared exhaust fumes”. While many tend to overlook these claims as being a hoax or pure conspiracy, there are a lot of us out there who are taking these accounts more seriously. 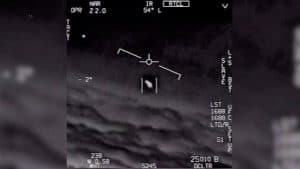 Naval video footage featuring these unidentified flying objects date as far back as the 1940’s, when events surrounding Area 51 became highly publicized. Since then, hundreds of videos and images of UFOs taken by the United States Navy and Air Force can be easily accessed through a simple Google search. But why all the hype now?

Thanks to the internet and social media, information sharing allows anyone to access declassified information regarding alleged aliens and UFO sightings. But we, as consumers and earthly inhabitants, have come to demand a higher level of entitlement concerning knowledge of our galactic neighbors. Maybe it’s because of the upcoming raid on Area 51, the throng of new video footage, or maybe because a presidential candidate may have just offered us a chance to get the real answers.

Whether or not Bernie Sanders is elected president in 2020 and actually releases any new information, the general public has made it clear that classified information regarding UFOs should be common knowledge. The recent release of the Naval UFO footage has left us with more questions than answers since the Navy themselves seem just as perplexed as everyone else. But the briefing that took place last month makes us wonder if higher-level government agents know more than what they claim. While Sanders’ comical pledge may never come to fruition, the recent spike in interest and demand of information sharing regarding our alien neighbors may lead to some interesting times ahead.

Do you like nerding out as much as I do? Check out my other stuff here and let me know what you think!