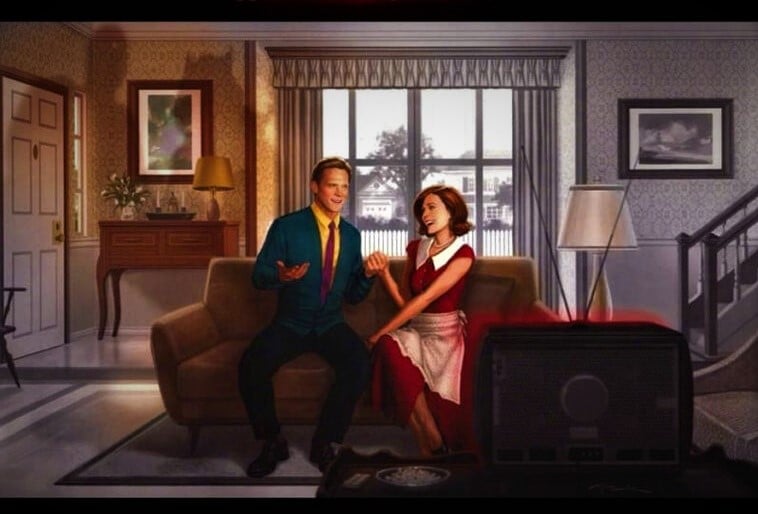 WandaVision is the superhero sitcom mash-up we’ve been waiting for.

These Marvel heroes are taking on a whole new world.

WandaVision, the newest addition to the Marvel Comics Universe, promises to be a “genre-bending” project that will explore paths in the comics that the films haven’t had time for. The show will star Elizabeth Olsen as her Wanda Maximiff/Scarlet Witch character, and Paul Bettany’s Vision from the Marvel films. The cast talked to Entertainment Weekly and PEOPLE at the D23 Expo about the new show which has been described as “bonkers”.

Olsen characterizes the show as “a mash up between American sitcoms throughout the decades, but then it snowballs into the Marvel movie you’ve grown to know or love.” Olsen explains how WandaVision will explore comic book backstories and aspects of Scarlet Witch’s character that Marvel hasn’t touched on before. “I’m very nervous and excited about it in all the fun ways,” she says,” It’s going to be a wild ride.”

From what the cast says, we can already see that this will be a standout Marvel project just based on its premise. Not much else has been released about the story of WandaVision yet, but what we know so far about the two characters is that Vision is, well, he’s dead. Vision was killed in Avengers: Infinity War. Twice, actually. The first time was when Scarlet painfully destroyed the Mind Stone to prevent Thanos from acquiring it. Then, Thanos used the Time Stone to rewind time and take the Mind stone from Vision, killing him in the process. Wanda was able to exact revenge on Thanos in Endgame, but we have yet to see how Vision ties back into the story.

Fan theories have been floating around about how they might use Wanda to bring Vision back into the series. A popular theory comes from House of M comic book series. Some fans think that Scarlet Witch will manipulate reality to bring Vision back after an apparent mental breakdown. This route might even tie in the creation of the X-Men and the MCU. Unfortunately, the show isn’t due to be released until 2021 so we have plenty of time before more details will come out. Luckily for us, Bettany is sure that “fans are going to be really blown away by it”.

WandaVision is set to premiere on Disney+ in Spring of 2021.

What do you think the story of WandaVision will be? Are you excited to see them together again? Will Marvel’s epic risk of genre-blending payoff? Let us know what you think in the comments below!