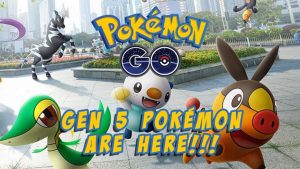 Grab your Pokédex, Pokémon Trainers: several new Pokémon are set to begin appearing in the world of Pokémon Go today! According to Pokémon Go developer Niantic, the new additions will start to pop up at 1pm PST. The new monsters hail from the Unova region, first discovered in the Nintendo DS titles Pokémon Black and Pokémon White.

As with previous generations, Gen 5 Pokémon will be available in a variety of ways. Snivy, Tepig, Oshawott, Patrat, Lillipup, Purrloin, Pidove, and Blitzle will pop up in the wild, while others will be available in eggs and Raid Challenges.  The monsters available through egg hatching are:

Meanwhile Lillipup, Patrat, and Klink will also be available in Raid Battles, though Klink in particular will only show up in Raids and eggs.

Differently-colored “shiny” versions of Lillipup, Patrat, and Klink may also appear for those lucky enough to encounter them, but as Pokémon fans know all too well, the chances of that happening are incredibly low.

A fresh lineup of region-exclusive Pokémon will also emerge in the Gen 5 update. Pansage will be available in the Asia-Pacific region, Pansear in Europe, Panpour in the Americas and Greenland, Heatmor in the western hemisphere, and Durant in the Eastern hemisphere.

The final new addition will be the Unova Stone, an evolution item capable of allowing certain Gen 5 Pokémon, such as Lampent, to evolve. They won’t be easy to get ahold of, though – for now, Unova Stones can only be earned from Research Breakthroughs, which require players to complete seven different Research Tasks on seven different days.

Are you excited for these new Pokémon to start appearing in Pokémon Go? Leave us a comment and let us know which ones you are most excited to catch.