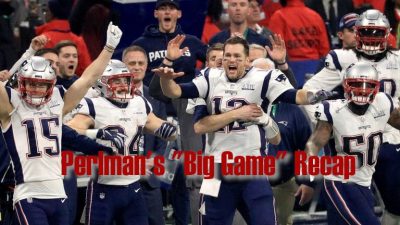 Super Bowl LIII took place last night inside Mercedes-Benz Stadium down in Atlanta, GA, where the football world saw the New England Patriots defeat the Los Angeles Rams 13-3.  This Super Bowl was hyped up as a good matchup all around and ended up being a complete letdown.  While there weren’t many points scored in the game, it wasn’t fully because of great defense but rather just disappointing offense performances.

The Patriots got off to a hot start on their first four plays of the game which were all runs, but then Tom Brady threw a interception on the his first pass attempt of the game and the fifth play of the opening drive.  The interception was the first time ever Brady has been intercepted on his first pass attempt in a postseason game.  With the interception, it seemed as though the Rams were going to take the momentum and storm their way down the field to take an early lead.  The Rams, however, disappointed, gaining two yards on their first play rush, followed by two straight incompletions, which led to the first of nine punts for Los Angeles.  As for the remainder of the first quarter, the Patriots place kicker Stephen Gostkowski missed a 46 yard field goal attempt on New England’s second drive. Meanwhile, the Rams punted on their other two drives of the first quarter.

Entering the second quarter tied at 0, the Patriots were able to make their way down to the Los Angeles 24-yard line, where Gostkowski connected on a 42-yard field goal to give New England a 3-0 lead.  After the Patriots field goal, the Rams still weren’t able to make any dent into the scoreboard, as they punted on all three of their second quarter drives.  While the Patriots first drive led to points, the remainder of their second quarter drives resulted in a punt and a turnover on downs at the Rams 32 on a 4th & 1.  Overall, the first half of the game was not something that either team really should have been proud of.

Once the halftime performance by Maroon 5, Travis Scott, and Big Boi wrapped up, we were ready for what we hoped would be a better played second half.  The Rams received the second half kickoff after deferring at the coin toss.  Los Angeles was still unable to move the football down the field, collecting only 25 yards on the first two possessions, both ending in punts.  After quickly stopping the Patriots on their first two possessions of the second half, the Rams were finally able to help their cause with a 10-play 42-yard drive that ended with a Greg Zuerlein 53-yard field goal.  Tied at 3 entering the fourth quarter, we still were searching for the first touchdown and possibly the game-winning score.  The prayers were answered seven minutes into the final quarter: rookie Running Back Sony Michel powered his way into the end zone from 2 yards out, following a Brady-Gronkowski 20-yard connection.  Los Angeles pushed back after falling behind 10-3, with a 7-play 48-yard drive that ended in Jared Goff’s pass being intercepted by Stephon Gilmore as the Patriots brought an all-out blitz.  After the interception, the Patriots sealed their victory with Gostkowski’s second successful field goal, this time from 41 yards away.  With little time left in the game, the Rams were able to move the ball into field goal range, where Zuerlein missed a 48-yard field goal attempt, and the game ended with a Brady kneel with five seconds remaining.

Overall, this Super Bowl was a complete disappointment from my perspective as a fan, but also neither coach can or should be happy with their teams’ performance.  Yes, New England can celebrate with the win but knowing how they played, they should feel grateful to come up with the win.  Los Angeles will remember this terrible performance and look to get back next year and re-write this performance with a better one.

Leave your comments below!